HELP US IMPROVE THE PLANET WHILE WE PARTICIPATE IN THE SUCCES OF YOUR PROJECT.

Upon request, each product purchased for your Project will be planting 1 tree in this African community helping to create Jobs and reforest the area.

At the end of your Project you will receive a tree-planting certificate for the same number of products that you purchased supported by WeForest.org, an international organization based in Belgium.

We all know that education is the center for the development of the poorest nations: How can the vicious circle be broken when the economy is not available to send the children to school? Providing long-term work to women in those remote regions makes this possible. Our local affiliate Eden Reforestation Projects employs those single mothers and widows who work year after year on our projects to be self-sufficient and able to pay for school and medical care. 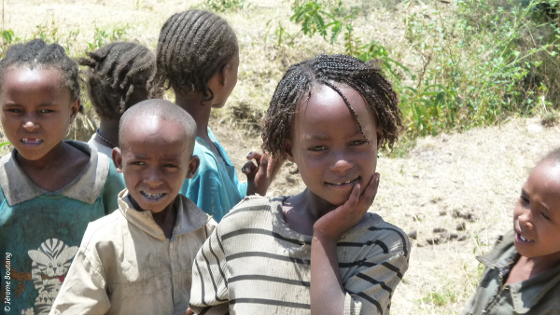 In addition, new microenterprises are created. All this while transmitting WeForest's objective of restoring a severely eroded deforested area treated by desertification. Ethiopia is one of the poorest countries in the world. With a population of around 85 million people (2015), 36 million people (44%) are living in poverty and more than 12 million are chronically or at least, periodically, short of food. Most of them live in rural areas with agriculture as their main occupation.

With 80% of Ethiopians depending on agriculture as their way of life, poverty has been worse because of the severe arid condition that persists due to the lack of rain added to civil disputes. All the efforts that have been made to improve conditions in Ethiopia have not been sufficient and the progress remains elusive. Sadly, the people in extreme poverty are the small and marginalized farmers.

Some of the main causes of poverty in Ethiopia include: